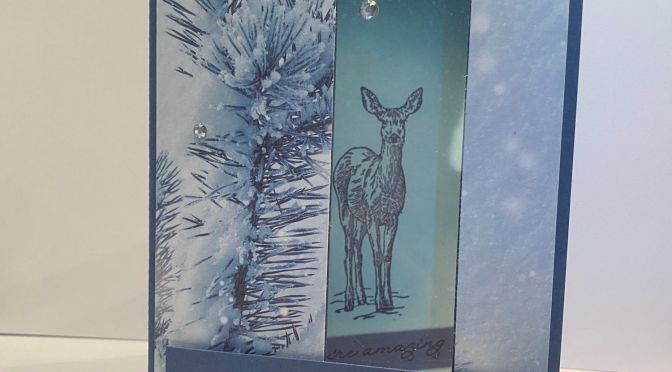 This is a card I did last winter, and now the DSP I used is back (in the clearance section.) The Feels Like Frost DSP is beautiful so if you are going to create wintery cards this year think about picking it up.

Watching You Watching Me is a Window Card. The illusion is formed by cutting a 1-1/2 inch gap and then adding a 2 inch x 5-1/2 inch piece of clear window acetate between the cardstock and the DSP panels on the card front. The sentiment bar spans the front making it look as though it’s what is holding the card together. Cool effect and has a lot of other applications too!

Before stamping the deer on the inside I used white pigment ink on a blending brush to lighten the cardstock area and the result looks like a snowstorm in the moonlight. I added some stamping around the perimeter with a dot stamp. You could even add a few well placed “flicks” of white ink after stamping the deer to give a feeling of snow in the air, too. Vary the pressure of the blending brush and keep layering to get the brighter “snow” in the foreground.

Love to All Craft-along Kit

Let's make tiny, beautiful pieces of art to share with those we love!